The Skulduggery Pleasant series is hilarious, smart, action packed and full of extraordinary characters – a riotous blend of brilliant storytelling and comic book excitement, it’s perfect reading for kids who are bored of the same old heroes. 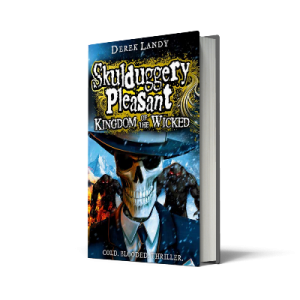 Children of 9 and up from all over the world have discovered the awesome thrills and humour of the skeleton detective and his teenage sidekick as they battle to save the world.
Kingdom of the Wicked is the seventh instalment in the biggest, funniest, most thrilling comedy-horror-adventure series in the universe – and the follow-up to 2011’s number-one bestseller, Death Bringer…
Across the land, normal people are suddenly developing wild and unstable powers. Infected by a rare strain of magic, they are unwittingly endangering their own lives and the lives of the people around them. Terrified and confused, their only hope lies with the Sanctuary. Skulduggery Pleasant and Valkyrie Cain are needed now more than ever.
And then there’s the small matter of Kitana. A normal teenage girl who, along with her normal teenage friends, becomes infected. Becomes powerful. Becomes corrupted. Wielding the magic of gods, they’re set to tear the city apart unless someone stands up against them.
Share this post...