Springer Spaniels And Biting Off More Than I Can Chew

This is a cautionary tale for those of you who suffer from the strange addiction of biting off more than you can chew.

It is something I am repeatedly guilty of, and it is a very irritating failing for everyone including me.

I am sure it is some in-built habit I have developed as I seem to be hardwired to creating more busyness in my life. 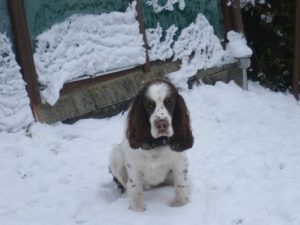 I do wonder sometimes whether I am just on some sort of self sabotage mission to subconsciously make life more difficult than it already is.

So what prompted me to take on yet another project? Well life was in a sort of state of un-animated suspension – and had been for quite some time.  Everything in our lives seemed to be stuck in the mud, not in a particularly bad way but in a frustrating and rather boring way.

We just seemed to be constantly on a helter skelter of being very busy but with nothing on the horizon to look forward to.

So in my wisdom I decided the family needed a bit of a lift. One of the things we, well I, was considering doing, was getting a rescue dog from a local charity to keep Paddy our eleven year old Springer Spaniel company.

Somehow having made a tentative enquiry, and mentioned in passing, we liked English Springer’s we found ourselves three days later being introduced to this rather beautiful hang-dog Springer Spaniel who was looking for a foster home.

We called him Mr Darcy.  Actually he started off as Darcy, but he had more of an aloof stuck up air about him so instead of being a Bridget Jones Darcy, he became a Pride and Prejudice Mr Darcy.

It suits him. Stubborn, affectionate and with a real need for therapy for his obsessional stealing disorder, I have never known such a naughty dog.  He is the most blatant and unremorseful thief whose prime focus in life seems to be to cause chaos.

Most of my conversations are now interrupted as I run off to investigate where the sound of rustling is coming from and exactly what Mr Darcy has managed to pinch or rip open this time.

One of his more unusual doggy habits is moving ornaments with his nose, which if you have a crystal chess set, at dog nose reach, is less than ideal. On top of which he can open any cupboard door, even if is only the teeniest bit ajar. And when you haven’t seen him for a while …you know that spells trouble.

In a busy house with lots of comings and goings Mr Darcy seems to manage to wreak havoc on a daily basis with our family life. I feel like there is a toddler in the house again, and a wild one at that. I am constantly on high alert and unable to complete any conversation without an “excuse me …..I just need to check what Mr Darcy is up to.”

Of course we are just fostering him – so we could give him back.  But despite his failings he has won our hearts and affection.  He is seriously cute, playful and very cuddly and probably one of the most placid dogs I have ever come across.  He also managed to redeem himself slightly the other day, by growling very loudly when he noticed the milk was about to boil over while he was checking  out what was on the stove.

As you can imagine initially nerves got very frayed, as another piece of toast, cake, loaf of bread was whipped from right under our noses.  But now it seems that family life has adjusted to having a naughty dog and to be fair he has given us a lot of laughs

And in case you are wondering, I have checked on the internet, ready my dog books and watched endless episodes of The Dog Whisperer and Dog Borstal.  But apart from the predictable advice which is to make sure he does not come into contact with any unauthorised food, which we are attempting to do – there seems to be no immediate cure to his obsessional thieving disorder.

And the moral of the story, before you take on that one extra thing, just ask yourself. Are you biting off more than you can chew? Sorry, got to dash … there’s rustling coming from the kitchen again!  Mmm the biting off more than I can chew also probably accounts for why I have got four children.