Party snacks – potato skins may just be the perfect choice

Making snacks which you can eat as finger food that are warming and tasty on a cold autumn or winters evening, may not be as time consuming as you first think. 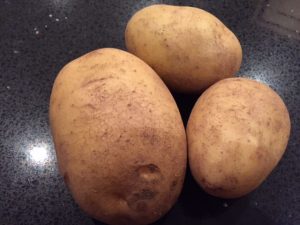 The thing is as chief cook you don’t want to spend all evening in the kitchen you want to be part of the party too.  So make sure whatever you decide to eat needs no last minute prep.

The thing about potato skins is that you can you make them in advance and in stages, allowing you to get on with doing other things.

Potato skins catering for all tastes

You can also create a range of fillings to cater for all tastes and diets.  All you need to is let your guests add the filling of their choice, although personally I think well seasoned they are a nice snack on their own.

The following recipe will feed about 6

Take 12 potatoes weighing about 100g each and rub with olive oil and season before placing in the oven for 45 minutes until they feel slightly soft when squeezed.

Get them out of the oven and leave them to cool. They need to be cool enough to handle them. However if more convenient cook the potatoes one evening and move on to stage 2 the next day.

Cut each potato skin in half length-ways and then into quarters.  Scoop out the potato flesh leaving a layer of just 1cm.

Place the quarters on a wire rack above a roasting tin with the skin side facing downwards. Brush the remaining surface with olive oil and season with salt and pepper.

Return to the oven for 15 minutes and allow to cool a little before adding fillings of your choice.

The potato skins can be made a couple of hours in advance and then warmed through ready for when you want to serve them.

The fillings you can prepare in advance and allow your guests add the fillings of their choice to the potato skins.  Grated cheese, baked beans, crème fraiche with chives, ragu, chilli, or crispy bacon bits, all work well.