I would like to tell you about a product which I quite accidentally came across and has been such a help.  I would like to say a life saver but as I am talking about my dog – and he is the one who is suffering that may just be tempting fate. 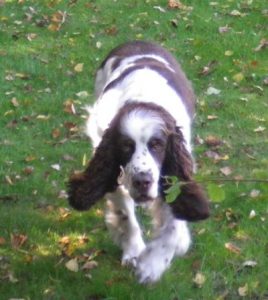 Mr Darcy my beautiful springer spaniel has poorly ears.  As you can see his ears are enormous.

He is a rescue dog and to be honest they may have been a bit poorly even when we first got him.

However undoubtedly the ears have got worse.  I took him off to the vets and he was prescribed ear drops, anti inflammatory tablets and antibiotics.

Over a period of about four months this process was repeated as the poorly ears kept coming back.  As you can imagine this was really racking up the costs.

Each time I walked out of the vets I had said good-bye to the best part of £200.  Although fortunately Mr Darcy is insured the limit on any one claim for the same problem is capped at £500, which clearly does no go very far. It was costing us a fortune – and he was not getting any better.

Eventually the vet – a very nice chap suggested a specialist, his ears being washed out, scanned and goodness knows what else.  The vet  admitted that this problem was very difficult to treat and there were no guarantees that Mr Darcy and his poorly ears would recover.

As you can imagine this was both quite upsetting and also very worrying as the costs for these poorly ears were now quite likely to run into thousands.

So I consulted the internet in desperation and came across a website and forum which seemed to have lots of comments from dog owners with  similar stories to mine.  Smelly weeping ears.

Organic apple cider vinegar was recommended. Three parts water to one part vinegar.  The view was that this could get rid of any fungal infections in the ears much more successfully than antibiotics.  I tried it and it certainly seemed to help. Cost less than £7.00

A friend then contacted me about a product called Thornit an old-fashioned remedy for canker and ear mites which again has loads of recommendations of its success and many similar stories of dogs, vets and poorly ears to mine. Cost of a small bottle £8.00 cost of a big bottle just over £20.00.

Mr Darcy’s ears are better – but at the moment I can not say cured.  I need to persevere longer with the Thornit than is recommended.  But having consulted some doggy people they don’t think this is a problem.  I have also just started to put a couple of teaspoons of apple cider vinegar on Mr Darcy’s biscuit treats.  Apparently this can help address fungus from the inside as it were.

Hopefully Mr Darcy and his ears will make a full recovery.

I just wanted to share this story with you – so if any of you busy mums are suffering with a dog or cat with poorly ears you can take a look at these products, which seem to work as well if not better than traditional medication and certainly are not going to break the bank.  Make sure you read the reviews too. Good luck.