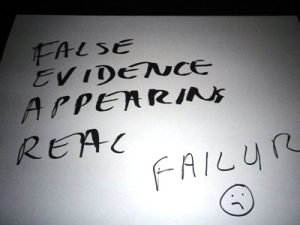 A lot of the time our fears are completely irrational. My fear of small harmless house spiders is good example. They can not hurt me. Even the big hairy ones are tiny compared to me.

But like many people I have an irrational fear of spiders. So I have allowed myself to be a victim of false evidence appearing real.

Quite often we develop irrational fears which are simply based on our own personal experiences. We find something difficult, embarrassing, scary and we lump it in the Don’t Want to do That Box.

Why false evidence appearing real is bad for children

For children this can become a problem when something happens which bothers them. It can affect them in all sorts of ways which may make them reluctant to try new things, or give up on things because they find them too difficult.  The result is they lose confidence in themselves and feel deep down that they are failures, or just are not good enough, which is very sad.

Personally I think the word failure should be wiped from the dictionary. It causes so much heartache and angst in life and becomes a fear in its own right. Fear of failure stops us trying stuff in case we fail. Now that really is False Evidence appearing Real.

When Thomas Edison was asked how he felt at having had seven hundred unsuccessful attempts to invent the electric light bulb, he responded:

This is a wonderful quote and fantastic way to approach situations when they are difficult or not going quite as well as we would like. And a good one to pass on to our children as they face their fears and challenges.

The thing is generally in life we learn more when things  go wrong rather than when they go right. (Just like Thomas Edison).

Let’s face it there are plenty of things in life which are “have to dos” that are not much fun. Better to learn to reframe difficult situations and see them as learning opportunities.  Ban the word failure from you and your children’s  vocabulary and then you and them are less likely to become a victim of false evidence appearing real.