Carl Christian created the  City of Friends, the popular children’s series which teaches children valuable life lessons. Read how the idea came about and what inspired him to make his dream become a reality.

Remember every idea starts with a dream!

Interview with Carl Christian founder of City of Friends

Q: Thanks for taking time to talk with us today Carl Christian. The creation of City of Friends is a unique story that has captured the hearts and minds of children and parents alike. Can you tell us how City of Friends came about and what inspired you to write the TV series? 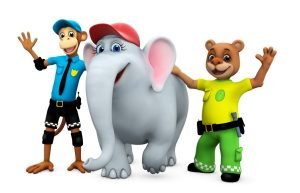 A: City of Friends is a deeply personal story for me. Since I was a young child it was my dream, like many children, to become a policeman in my home country of Norway. In 1998 I graduated from the Norway State Police, a very proud moment indeed.

I worked in various departments and areas of the Norway State Police before I was recruited into the Special Forces (S.W.A.T) team handling serious cases of crime. As I worked these special cases, it became clear to me that my work as a police officer was only made possible with the assistance of the Paramedic and Fire Brigade teams.

Together, and only together, we were able to solve crime and help people quickly. Over time, we built friendships and realised that it was this special teamwork that made our jobs and lives more rewarding and we began to appreciate the work each other was doing.

It was around this time that I also realised what important life lessons I was learning and with one young son at home, I was searching for a way to pass these on. I began to create bedtime stories for my son – gentle life lessons that would help me to teach him about friendship, tolerance and the importance of teamwork.

Whilst my day-job was based in a city that had serious crime and was focused on adults, I instead created a utopian version of this world – a city where everyone is friends. I created characters based on the three emergency services – police, fire and ambulance – that would help people in this city of vehicles, animals and people and so Max, Elphie and Ted and many other characters were born.

Each day I would come home from work and tell my son all the amazing adventures of working with the emergency services to solve problems around our city. My son was fascinated by my stories and soon he started to recognise the role of each character and know who would be needed when a problem arose and when.

It was around this time that I started thinking that perhaps I could turn this into something bigger so that more parents could teach their children the importance of friendship and teamwork to their young children. I decided to start documenting my stories, noting the various characteristics of Max, Elphie and Ted, sketching what they looked like and so on.

One day my son’s nursery called and asked if I would come along and read the children some of my stories. Like my young son, the children were fascinated. 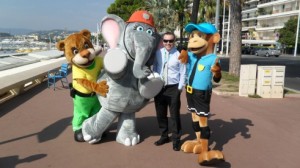 The idea to turn my stories into a TV series came while I was watching a children’s TV show with my son and realised that City of Friends has all the elements to make a great show. I started talking to the Norwegian broadcasters and the Culture & Arts Ministers in the Norwegian Government. We secured our first round of funding from the private sector in 2007 and again in 2008 and City of Friends made its broadcast debut in a 26 x 10 minute part series in January 2010.

I had fulfilled my first dream to become a policeman and now a second dream was starting to take shape.

Q: What do your kids think about City of Friends?

A: When I first created City of Friends, I had one young son and now I have three! They all love City of Friends for different reasons. Each of my sons identifies with the main characters but above all, they love all the action and adventure that takes place when a crisis arises! I guess it is the sense of purpose to each story and when they speak of teamwork and friendship and every time we take the series into a new area or series, it reminds me how important it is to remain true to the core values of the show.

Q: How did your colleagues in the police force react to City of Friends?

A: The Norwegian State Police have been very supportive from the outset and today, they have embraced City of Friends as much as the team working on it. They appreciate the endorsement it gives the police force in general as it all goes towards the work we are doing in our own city.

Q: City of Friends has taken the world by storm and is airing in 150 countries, why do you think it’s so successful?

A: City of Friends is an imaginary world that I created by seeing a world through my son’s eyes. I asked myself what world would he like to live in, what was his perfect world? I imagined he would like to talk to fire engines and other vehicles, play with monkeys and kangaroos and live in a world where vehicles, people and animals all live side by side equally and always helping each other out. I believe the show remains true to these original ideas and core values which parents support and trust and children enjoy. What has surprised me is that in only 4 years, we have achieved broadcasting in more than 150 countries and in 22 languages! We are still growing and expanding the TV distribution but along the way we have discovered more opportunities to grow the City of Friends franchise into areas we had never imagined. It is exciting times for City of Friends!

Q: What can fans of City of Friends look forward to in 2012?

A: The company I founded in 2009, CreaCon Group, was established to create the television production of City of Friends but today, we have a business that more depth and breadth than just the TV series. We really wanted City of Friends to reach as big an audience as possible and experience the brand and its characters on several different levels. We have created a fantastic Live Events business in Norway which we are hoping to replicate around the world once the show has been established with audiences. In Norway we are now selling 20,000 tickets to shows staged in Arenas such is the popularity of the series. We hope to be bringing this to the UK in the next 2 years. We are also increasingly busy establishing our Licensing business in the UK so that we can deliver character-based licensed product to all our fans in the UK. This year we will also be releasing some great original music on our first City of Friends CD – set for a 2012 release.

Q: Many people are talking about City of Friends and how it teaches kids valuable life-lessons, can you tell us a little more about that?

A: Like all parents, I wanted to create a show that helps me teach my children important lessons about the world we live in. I believe the show has remained true to this vision and lessons about friendship and teamwork are timeless.

Q: Growing up what was the most valuable life-lesson you learnt?

A: The importance of friendship and taking care of people around you. Also, keep holding on to your dream as one day it will come true and without this belief you will find it difficult to believe it will one day happen.
I was first tested when I wanted to join the Police Academy. There were over 5000 applicants for 300 positions and without a sense of belief and knowing I could achieve my dream I would never have got a place and be where I am today.

Q: And if real life could learn one important life-lesson from City of Friends, what would it be?

A: It is a simple but clear message. Wouldn’t life would be much easier if we were all just friends and if we all helped each other out? City of Friends is fundamentally a community based on trust, friendship and where everyone is treated the same way.

Q: Finally, which character do you relate to the most?

A: Max the Monkey of course! As the resident police officer in City of Friends I easily relate to him the best!

Q: What three characteristics describe you the best?

A: Creative, driven and ambitious.

Q: What do you think is more important, ambition or talent?

A: Ambition is more important but you really need a little bit of both. Without ambition, your talent can easily go unnoticed or unfulfilled however if you have the ambition to see something through, you can achieve loads.

Q: How would you rate out of 10 the satisfaction with your life to date?

A: 7 out of 10. More than OK but not perfect. I’m a busy father of 3, with two jobs and travelling around the world. But most importantly, I’m having fun along the way.

Q: If you could be anything you wanted to be, what would it be?

A: Liverpool’s Number 9 player or a fighter pilot or if either of those didn’t work out, the lead singer of U2.

City of Friends airs weekdays on Channel 5’s Milkshake at 6.20am, Saturdays at 6.15am and Sundays at 6.25am or visit www.cityoffriends.com and the Facebook page http://www.facebook.com/CityofFriendstv to find out more information.